Honeymoons are among the most romantic experiences for newly-weds. However, Nourhan Refaei and her husband Amr Gouda didn’t pick a tropical island with exotic beaches, or other dream destinations like most honeymooners. Instead, they packed their gear and hiked the Italian Alps. That should not come as a surprise from the couple who is passionate about hiking. 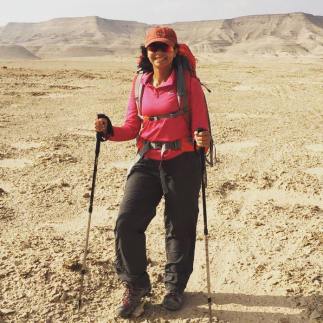 For Nourhan, the business administration major, it all started in 2009 when she joined a group of friends on a trip to climb Bab el Donia trail in the Saint Catherine Mountain, Sinai. It was her first hiking experience. “I was so excited to join them to find out what hiking was all about. And I fell in love with it.” Since then, she hiked many mountain trails in Egypt and abroad. “It felt as comfortable as being home,” she said.

In 2015, Nourhan “joined a friend,” who later became her husband, on an expedition to summit Mount Elbrus (5,642m) in Russia, Europe’s highest peak. Their decision to summit Elbrus was made 3 months prior to the expedition, which put a lot of pressure on them. “We went through very challenging training; mainly carrying weights for long distances uphill,” Nourhan said. It took them 6 days of strenuous climb to reach the summit. “We wore heavy boots supported with crampons and ice axes.” And despite the cold weather and the low oxygen level, they succeeded to summit it “at 9:20 am on Tuesday 21st July 2015.”  Nourhan wasn’t aware she was the first Egyptian woman to summit Elbrus until she returned back to Egypt. 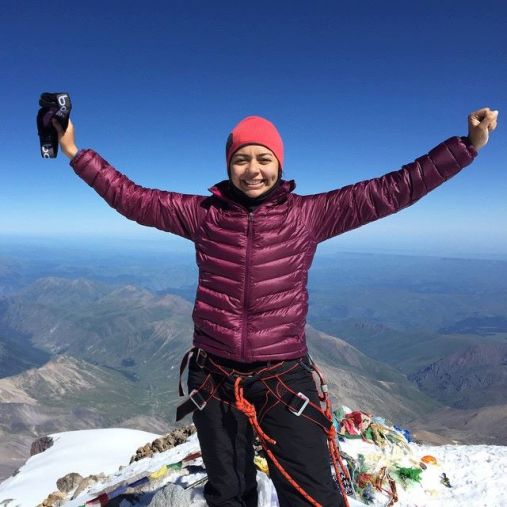 Their success to summit Elbrus, motivated the young couple to follow their passion for hiking and mountaineering. They vowed to climb the 7 summits together. They also vowed that before the end of 2017, “to stand” on top of mount Aconcagua, Argentina (6,962m), the tallest mountain in South America. “Since then [Elbrus]we have attempted different mountains. We had many successes and failures too.”

They planned an expedition to Kilimanjaro in December 2015. It was Nourhan’s first experience, but not Amr’s. He had already summited it in 2012. On Kilimanjaro, at an altitude of 5300 m., Nourhan suffered altitude sickness and they had to abort the expedition.

To keep their promise to themselves, in February 2017, Nourhan and Amr started planning for their new challenge; Mount Aconcagua in Argentine. A friend expressed interest to join them. The 3 mountaineers scheduled their daring expedition for December and secured a local Argentinian agency to guide them through it.

Once the logistical planning for the expedition was out of the way, it was time for them to get in shape. “We have taken our training to a whole new level. First we started swimming to increase our lung capacity and get back into shape. Then we introduced running and cardio to increase our agility and fitness level. The final phase was endurance training which included hiking for long distances while carrying a heavy backpack. Wadi Degla in Maadi and Saint Catherine Mountains hosted our extended training period.”

Before year end, “and after 42 hours of flying,” they arrived to Mendoza, Argentina, on the night of Dec. 13th. Over dinner, they met the guides and the other team members who were joining them on the expedition. “From the first moment we met the rest of the team, it felt like we knew each other for a long time. The most amazing people you could climb with,” Nourhan said.

The following morning, the guides briefed them on the details of the hike and the safety measures. They also checked their mountaineering equipment and tools and showed them where to rent the missing gear. After the guides approved the gear and equipment, the climb permits were issued.

Later in the afternoon, a bus transported the team and their guides to Los Penitentes, a small ski resort village 4 hours away from Mendoza. They spent the night in Los Penitentes, by the Aconcagua gate at an altitude of 2500m. In the morning, they loaded their gear onto the mules. “At noon on December 15th we took our first step into the Aconcagua National Park via the Horocones Valley.”

The first day hike was easy, almost flat. Within less than 4 hours they arrived to Confluencia camp at 3,200m. “The scenery was breathtaking, but it was very windy and dusty.” They spent the night at the camp and the following morning they started their acclimatization hike.  It took about 8 hrs. to reach Plaza Francia camp at an altitude of 4200m. and return back to Confluencia. “It wasn’t that hard but the wind was so strong, it almost pushed me off the mountain several times. I had to kneel to the ground to save myself. The wind was around 80km/h.” Nourhan said.

On the fifth day, they ascended from Confluencia to Plaza de Mulas camp at an altitude of 4300m. It took them around 10 hours to get there. “It was still windy. And as we were getting higher in altitude, Amr started to feel stick. Altitude sickness was hitting him hard.” Amr had difficulty breathing. Every few steps, he stopped to catch his breath. By the time they reached Plaza de Mulas, he was barely able to stand on his feet. “And with the low oxygen level, his heart rate was really high.” Fortunately, the following day was a rest day, but Amr’s condition didn’t improve. A brief visit with the camp doctor concluded that Amr had to evacuate the mountain immediately.

Three days into the expedition, on Dec. 18th, Nourhan took the hardest decision of her life, “I decided to evacuate the mountain with Amr.” They called their insurance company which, “handled the situation very professionally.” They secured them a helicopter evacuation, but due to bad weather conditions the evacuation was carried out the following morning. “The distance we climbed in 3 days took less than 10 min to reach the ground.” The rest of the team continued their attempt. Their Egyptian teammate managed to summit the mountain few days later.

“I evacuated the mountain and left my dreams up there, yet I didn’t think twice. I couldn’t leave Amr alone while I completed the hike. Sometimes, or always, you have to give up something you have been dreaming of and preparing for, for almost a year, for your loved ones.”

Regardless of the outcome, Nourhan is grateful for the experience. She is not giving up on her dream to summit Aconcagua, and neither is Amr. “I believe that I will be back to pursue this dream once again. Actually, I want to say that my dream doesn’t stop at Aconcagua. My dream is to stand on Everest. The top of the world.” 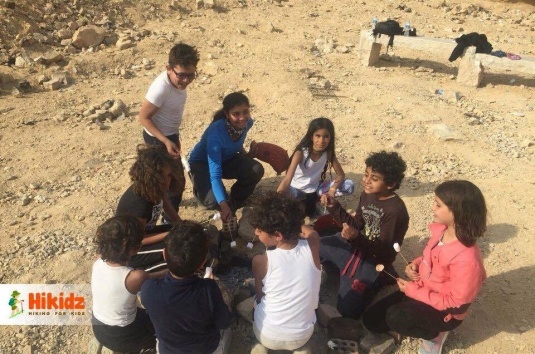 To share her passion for outdoors and a raise an environmentally friendly and active generation, Nourhan opened Hikidz, an agency that specializes in hiking and outdoors activities for kids between the ages of 8 and 16. “We motivate this age group to learn about outdoor activities and live in harmony with nature. We help them build specific characteristics at this age that will enable them grow into self-dependent beings.” Nourhan says.

Since its launch earlier this month, Hikidz organized 2 events. The events were enjoyed by the kids and appreciated by the parents. “I’ve seen how much they were happy. I believe I’ve succeeded in making them love nature, learn how to live in harmony with the surroundings, and above all depend on themselves. Honestly,  had as much fun as they did myself.”