Faten Hamama’s movies shaped the lives of women in Egypt and the Arab world for decades. Her death in 2015 marked the end of an era that many romanticized with. Her movies evoke nostalgia to another life long gone. A life that many had witnessed first-hand while others lived it through her black and white movies. She was Egypt’s ambassador of la belle époque.

The iconic Hamama wasn’t the prettiest or the sexiest of her generation of actresses. Her style was more of an Audrey Hepburn than a Rita Hayworth. But her movies left their mark in the hearts of millions. She stood out from the many stars who adorned the posters of the Egyptian movies, most of whom competed with Hollywood’s beauties. Her talent and charisma were a leading factor of course for her rise to stardom, but many others were talented too. Could it have been her love story with Omar Sharif, that brought more allure to her fame? The movies they made together were ranked among the best in the Egyptian film industry. Who can forget their role in “Nahr El Hob,’ (The River of Love), the Egyptian adaptation of Leo Tolstoy’s Anna Karenina.

Audience watched them fall is love after their first kiss, in Sharif’s movie debut Seraa fel Wadi’ (Struggle in the Valley). It was Hamama’s first ever on the silver screen, defying her own rule of keeping intimate scene out of her movies. The chemistry between them spilled over, and their love story became a twentieth century Shakespearean romance. She was married and he was a Christian. Unlike Elizabeth Tylor and Charlton Heston, though, they stayed married for twenty continuous years.

Dubbed as the ‘Dame of the Arab Cinema,’ Hamama played leading roles in more than one hundred movies throughout her career. Renowned Egyptian author Ihsan Abdel Kodous, said, “no other actress exposed the emotions of his characters like she did.”

In the 1940s and1950s, Hollywood movies were rivaled only in Egypt. But unlike Hollywood, women’s roles in Egyptian movies were more progressive. Actresses played more leading roles in Egyptian movies, and roles were written especially for them. Men played second roles in many of these movies. That shouldn’t come as a surprise when six of the leading Egyptian production companies in the 30s and 40s of the last century were owned by women.

Hamama also produced some of her own movies. An avid reader, and with many renowned authors in her inner circle, she selectively cherry picked classics of the Egyptian literature to play the roles of their female characters. Hamama and other movie stars had the privilege of choosing not just their stories, but also the actors in the leading roles. Omar Sharif, in his debut movie, was a replacement for another actor Hamama had rejected for that role. Director Yousef Shahin hired Sherif instead. They were classmates.

Soft spoken yet outspoken, Hamama was influential in the industry. She won a children’s beauty pageant in 1939. Her father sent her picture to director Mohamed Karim who was looking for a young girl for a role in the movie Yom Said (Happy Days) with famous actor and musician Mohamed Abdel Wahab. Hamama got the job. She was 8 years old. And unlike other child stars, she never lost her allure or charisma as she grew older.

Sharif’s emerging international career gave her the prefect excuse to flee the country in 1966 after a dispute with Nasser’s regime. Hamama first supported the 1952 military coup that out threw the monarchy in Egypt, but then opposed Nasser’s oppressive regime. In spite of his efforts to reconcile with her, her self-exile lasted until his death in 1971. Despite their conflict, Nasser called her a National Treasure.

The couple lived in Paris. Sharif’s international fame was gaining momentum. Hamama succeeded to conceal her private life from the public eye, but Sherif’s playboy life in Paris wasn’t easy to hide. His news was on the cover of magazines worldwide, and divorce became inevitable. After their marriage ended, Hamam returned back to Egypt, but Omar was banned from entering the country, because of his movie Happy Girl with Barabra Straisaned.

Hamama remarried but Sharif never did. He announced on multiple occasions that she was the love of his life and he would never love another woman again. He kept his promise and remained single until the end of his life. Sherif was eventfully forgiven by Sadat’s regime after the peace treaty with Israel in 1979, and he returned to Egypt. 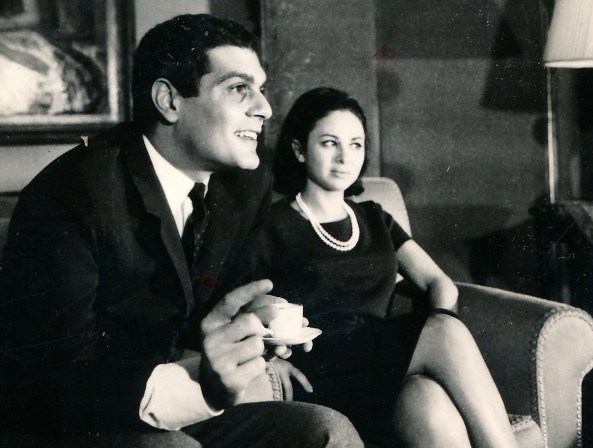 As her career soared, Hamama became even more selective in choosing her roles. The struggle for women’s issues that she had depicted in many of her earlier movies continued. As a matter of fact, all her movies in the last twenty years of her career were dedicated to women’s issues.

Her movie ‘I want a Solution’, released in 1975, was based on a true story about a woman who can’t divorce her abusive husband. The movie challenged and criticized the divorce laws in Egypt. It was instrumental in inspiring changes to Egyptian Personal Status Laws, to grant women divorce.

In 2007, eight of Hamam’s movies were included in the top 100 films in the history of Egyptian Cinema, by the cinema committee of the Supreme Council of Culture in Cairo.

Faten Hamama was not just an actress. She’s an Egyptian icon. She will be missed, but never forgotten. Her movies will immortalize her forever in people’s hearts.