A Hearing-Impaired Dentist Sends A Message of Hope

Esraa El Bably is a woman of exceptional qualities. Born with hearing impairment did not hinder her ability to become a successful dentist, in a world where studying to become a dentist is a challenge on its own. Not only that, she also became the first dentist with hearing disability to open her own clinic in Sherouk City, which “…is working better…” than she initially expected. Her brilliant ability to work hard despite all the challenges she faced has rendered her a success already. She is a role model to those who face difficulties in life, especially when these difficulties concern ones’ health and wellbeing. She did not allow these challenges to stop her from pursuing her dream of becoming a dentist, and this is truly admirable.

Her parents discovered her hearing disability when she was only one year old. They decided that she should not have to rely on sign language so that her “…world wouldn’t be limited…” as she puts it.  She also grew up to appreciate their decision after finding out that speaking “using words” was necessary, and that was how she communicated with her two siblings.  Even though her speech was not very clear, “…it wasn’t a problem…,” her siblings got used to her way of talking.

As a child, Esraa coped well and did not feel that her situation was very drastic or difficult. However, as she grew older, she realized that people around her were not so open to diversity and this impacted her decision to become self-reliant. During her childhood in Bahrain, she attended a resource unit that supported and integrated people with special needs. Her tutors were supportive and appreciative to her efforts to learn. Living in Bahrain was a positive factor in Esraa’s educational journey, as the country, her classmates and friends offered support and accepted differences more readily than many other places. They genuinely helped her succeed and wholeheartedly celebrated her success and achievements.

She later joined the British Council to improve her English skills and discovered that she was the first case with hearing disability to join their programs. According to Esraa, “…They were extremely welcoming such an experience and they made me an educational plan suitable for my condition, for example they eliminated the listening exam and distributed the grades on other papers. In addition they provided me with time after class to explain what I might have not fully understood. The beautiful thing is I could see they were always proud as I was excelling in the language…” 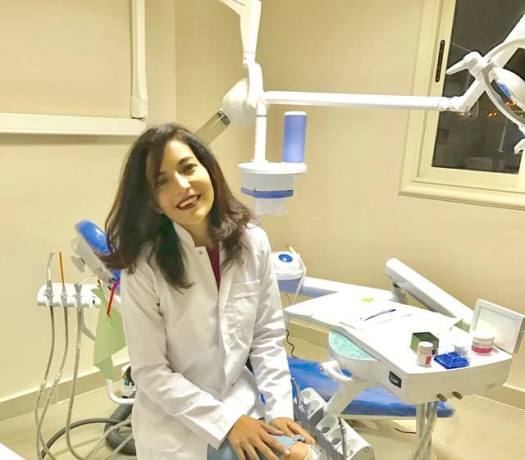 After Esraa finished her high school diploma with honors, achieving 94.6%, she joined the faculty of dentistry at the Future University in Egypt, since this college was not available in Bahrain.

She chose to study dentistry in an attempt to change the stereotypical image that limits people with special needs to certain professions,  and hence accepted the greater challenges pertaining to this career. Her goal was to become a successful dentist. Her six college years were her most difficult years. The professors were helpful and appreciated her effort in this field; however, socially she was faced with the bias attitude against people with disabilities, prevalent in the Egyptian society.

Esraa’s story of success is just an example of how people can overcome difficulties to reach their ultimate goals, defying the view of society and people surrounding them. Esraa feels that the true challenge is actually in our society, where people “…need to change and accept one another, we all have our faults, nobody is perfect or complete…” This is her motto in life, and she uses it always to encourage herself to always look forward and continue her long journey, despite all the obstacles she faces. She believes strongly in God’s mercy and how by His will she can accept and overcome the hardships of life.