A marathon runner, biker, diver and hiker, Manal Rostom is also a mountain climber. She climbed some of the highest mountains in the world; St Catherine in Egypt, Kilimanjaro in Tanzania, Mount Kenya, Piton de la Petite Rivière Noire in Mauritius and Elbrus in Russia. Her expedition to summit Aconcagua, in Argentina, failed due to weather conditions. Rostom is preparing for a second try and aspires to become the first Egyptian woman to summit Everest. Here is her story on Aconcagua. 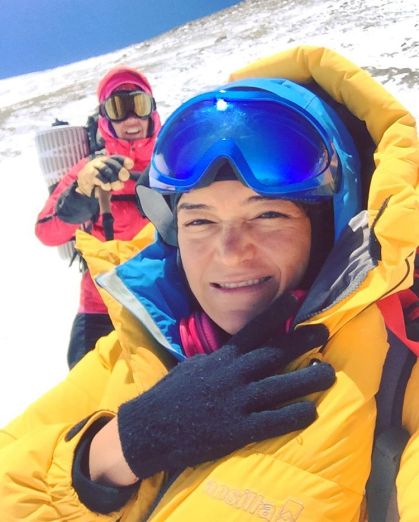 In October 2016, I was approached by an automobile company to take part in a campaign aimed at empowering Arab woman, the slogan of the campaign was #findnewroads. After nine years in the pharmaceutical industry, I lost my job in June 2016 and life was dark, unknown and scary. So, when the opportunity presented itself, I didn’t hesitate for a moment and I agreed to appear in the campaign. The company was also willing to sponsor my training for Everest, which was also my ambition to one day be the first Egyptian woman to get to summit Everest.

January 2017, I got on a plane to Lake Tahoe in California, to attend a three-day alpine training session followed by a trip to Argentina, where I was going to attempt the second highest mountain in the world – Mount Aconcagua- standing in the Andes at 6962m.

Aconcagua, which stands in the Andes mountains at 6962m., was a prelude to Everest. The pressure was on and if I was to summit Aconcagua, I can easily land sponsors for my Everest climb. The current situation is that expeditions will not take you to Everest if you have no Aconcagua experience, anything similar or a minimum of a 7000m.

I had been warned so many times about the weather but now thinking back I kind of shook it off. I had my “warm gear” from my five previously climbed mountains, so why would this one be any different?

But it was so different.

I felt the cold at an altitude of 3000m, when we reached the first camp. I kept telling myself it was going to be ok. We were told to save the heaviest gear (parka jacket etc.) for the higher camps, so I kept waiting and obeyed all orders and rules.

The funny thing about Aconcagua is that you have to go through health checkups until you reach base camp at 4300m. It’s rigorous but it makes you feel safe and nervous all at the same time.Every time they took my blood pressure, I was petrified that my heart would palpitate faster or harder.

After five days of climbing, I reached Base camp safe and sound. We had a couple of days to acclimatize and prepare for high camps. During that time, I had no phone reception or internet connection and my parents went absolutely mad thinking their daughter was gone forever.

After our rest, we went on a brutal nine-hour hike of very mixed terrain and I thought to myself – if you’re panting, huffing and puffing now, what makes you think you’re going to make it! But after giving myself a pep talk and two days of rest, we resumed.

Can you paint with all the colors of the wind?

We were surrounded by beautiful scenery and brutally cold weather all at the same time.

Every time a snowstorm would hit, we were told we‘d have to push our summit day back a bit. Your mental state of mind is integral to all of this and it can make or break you, so I used all my efforts to focus on the bigger goal – Everest.

As far as I was concerned, I had two issues to deal with. The first being that I was the only woman in the expedition team, which was comprised of myself and Janus, a 54-year old Polish man, who had climbed Aconcagua twice before, and climbed all the 7summits successfully once before. He was on a mission to complete all seven summits in five months, and  was in good shape for it. I am not the sort of woman who compares herself to others or is intimidated by someone’s performance or capabilities in general but mountains are a different story. I was intimidated for the simple reason that when you have different fitness levels – the expedition is highly affected.

We started on the wrong foot, but surprisingly me and Janus got along eventually. When we headed up to higher camps at 5000m and 5600m, he would lend me his satellite phone so I could speak to my parents. My very worried – sick parents.

One minute a day kept their worry at bay.

I was feeling great and I surprised myself when we got to the first camp at an altitude of 5000m, I was managing my altitude sickness and was less sensitive to the cold. I had no headaches or nausea and I was eating really well until we reached the second camp at 5600m.

We knew it would be really cold and would get even colder high up but no matter how prepared you are, nature has a way of overwhelming you. On the eighth day we were hit by a snowstorm and considering that I grew up in a desert I am sure you can imagine how difficult that was for me to cope with.

But as I am writing this, I feel so much pride of what I achieved both physically and mentally. It was Argentina’s hottest summer but still we endured 72 hours of extreme cold, -15 degrees Celsius and a wind speed of 80km/hour.

Despite attempting this climb at the best possible time of year for this sort of thing, we were still met by the unpredictable and violent nature of the weather.

For eight days straight I had to pee in a bottle and we still had one more week to go. At the higher camps food was minimal, as were our movements and in fact everything had to be kept to a minimum. During that time, the only thing that kept me sane was my one minute call to my parents. 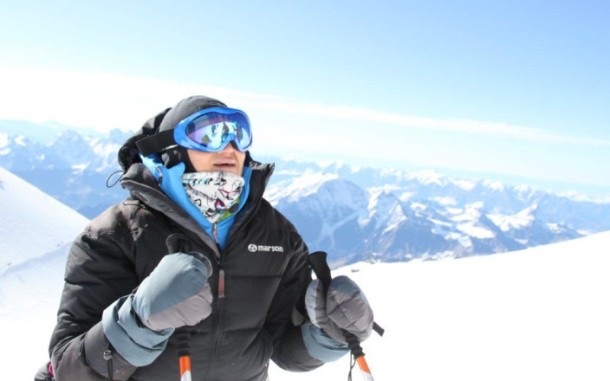 I would also read my book, over and over again. I kept trying to internalize it and digest it about a million times. I found myself speaking to my body, apologizing to everything I had put it through. Every day I would wake up and check if my nose was still there, it was that cold. We would wake up with our sleeping bags covered in snow and the conversations I would have with myself would help me through the cold.

On the third day, I was hit with the worst headache and I was screaming and moaning until our guide rushed over to me to check up on me.

He asked me to be honest with him and I told him that I wasn’t ok, and was plagued with feelings of nausea and a headache. I believe I looked as awful as I felt. The guide made the decision to take me down the next day.

After three days of enduring the weather and the physical pressure, I completely broke down in tears. I was losing hope and I was losing my grasp on things including how to achieve my dream.

I agreed to go down and after another night of horrific weather conditions, where I thought I was going to be swept off the mountain, we woke up to a sunny and relatively calm morning. We also woke up to order from the police rescue team that all expeditions were to come down. It came as a huge relief as at least the decision wasn’t mine.

On our way down I really struggled, for some reason I couldn’t breathe and I wasn’t feeling any better. The snow was waist deep and every time I sunk into it, I struggled to get back up.

I hadn’t eaten the day before, so we stopped our descent to get some energy and some dexamethasone to counteract the altitude sickness I was feeling. At that point we looked behind and Janus was making his way back up. Before we started our climb he was very vocal about his dissatisfaction for having to go down. 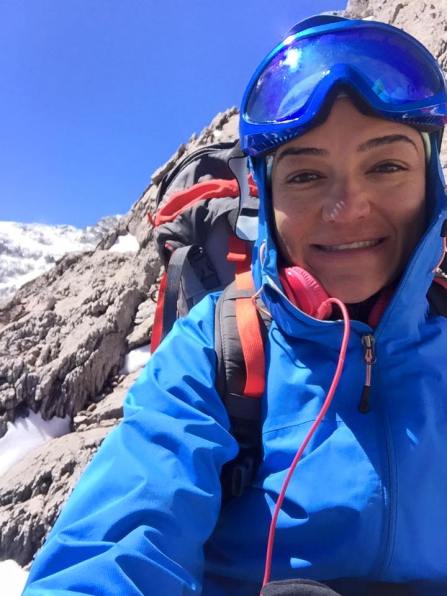 Our guide screamed and yelled but Janus wouldn’t listen, he was adamant to keep going. Our guide called the police but despite all his efforts, Janus kept on going up.

I am not sure how to describe what had just happened. I was hurt to the core of my heart that a mountaineer could just walk out on his team that way. In the end, Janus did make it to the summit.

In the meantime, I was starting to lose the feeling in my toes and was worrying that I would lose a toe to the snow. Somehow we made it to 5000m and we all made it down in one piece.

When we made it to 4200, I was overcome with a feeling of sadness, despite seeing the whole team there. I was relieved that I made it down and it was amazing speaking to my family who also felt a huge sense of relief.

I posted on my social media feeds that I did not make it and that once you come down, in most cases, you do not re- attempt the summit. I was only three days away.

The owner offered to give me another chance in a week’s time but after much heart wrenching deliberation I turned him down. I was exhausted mentally and physically and I was feeling deflated over my months worth of training, which I felt had gone to waste because of the brutal weather.

The weather may have stolen my physical strength but it didn’t take away my mental strength. I work hard on that, day in and day out. I feel like a mother who lost her baby in the first trimester and while I know it’s not the best of comparisons the anger I felt at not making it could only be explained by something like this.

I know I will return to Aconcagua one more time. I know so many people who did not summit from their first attempt. My dream is still so big in my mind.