A Ladies of Harley’s member, Dina Wassef ranks among the pioneer female bike riders who are breaking social taboos in Egypt. After graduating from the University of Fine Arts in 2007, Wassef worked as Sales Manager for Harley Davidson Egypt. That’s where she discovered her passion for bikes, learned to ride and hasn’t stopped since.

The independent proud young woman refuses to disguise as a man to please the society. She makes a point not to hide her hair under the helmet while riding her bike. She’s not worried much about sexual harassment on the road. Thanks to the roaring sound of her Harley, it keeps people at bay.

Wassef is also a member of the Egyptian Women Rider’s Club. 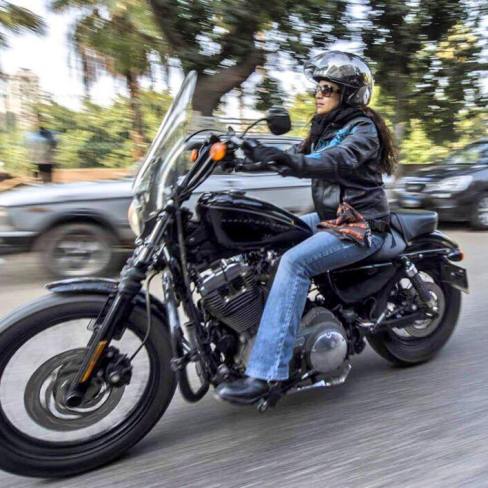 WOE: How long have you been riding motorcycles?
DW: As the Sales Manager of Harley-Davidson, I was very curious from day one to learn more about bikes. The pictures of American women riders in our catalogues and posters intrigued me and triggered my passion, and I always said to myself, “If they can do it, I can do it.” Plus, I thought it would make my selling skills more credible if I learned how to ride a bike, which was the case, because men were often surprised by the amount of technical info I held towards these babes. Anyways, I started to push my colleague, who was our official trainer back then, to teach me riding, every day during my break. And before I knew it, I was riding. I used to practice a lot while parking our bikes in the display area or going out on a test drive with a customer. In 2010, I bought my first bike from one of my customers.

WOE: What do you love about motorcycles and where is your favorite place to ride?
DW: I love everything about motorcycles. I love each detail in my bike, specifically. I’m a huge Harley-Davidson fan, my job made me see its real beauty. I’ve been to Harley Davidson museums, workshops and studied each screw, bolt and nut installed in a bike. Last but not least, I love the feeling I get the minute I get on the bike and the feeling I get after a ride.

I love riding on a highway, because you feel that you own the scenery, the mountains and the sea. I also enjoy riding in the city because it puts me in a different state of mind immediately. 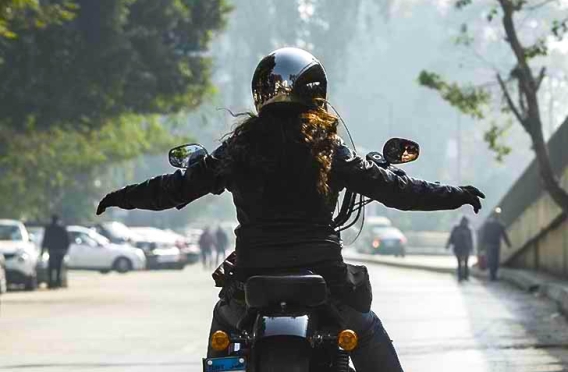 WOE: Who has influenced you to become interested in motor bikes?
DW: As I said earlier, catalogues and short movies I watched during trainings at Harley Davidson motivated me to be a rider, yet Indji Ghattas, my cousin and the Harley-Davidson’s dealer, who was also my boss, was the only lady rider I knew and she motivated me as well to ride. 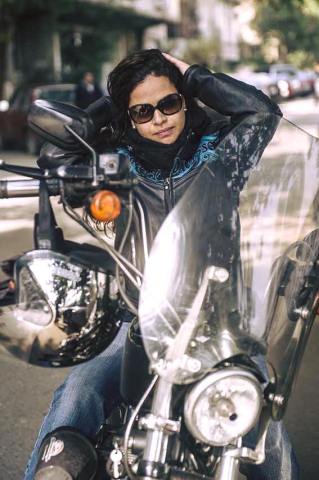 WOE: When did you join the Female Rider’s Club? How many members are there?
DW: The Ladies of Harley (LOH) has always been there, worldwide. In Egypt, for a while, Indji and I were the only female riders. By time, more women started riding bikes, few stopped, others disappeared and some are still riding. I believe it became an official group in Egypt 3 years ago or so. I don’t have an exact number unfortunately, but the number of women owning and riding Harleys are way less than the other brands, due to their prices I believe.

WOE: What was your fist bike?
DW: My first and only bike is a 2009 Sportster Nightster.

WOE: Who taught you how to ride?
DW: My trainer was the late Medhat Michel, he passed away 5 years ago.

WOE: What is so empowering about riding a motorcycle?
DW: While riding your motorcycle, you feel the power in the throttle, the exhilaration, adrenaline rush, and the beautiful sound of the exhaust. Should I say more? Apart from this, it makes me feel very feminine, confident and in control. I’ve never been so sure of something as much as I am, regarding the fact that I own and ride a motorcycle. It’s just phenomenal!

WOE: How is the riding experience different for women and men?
DW: Men do it as a hobby, a mean of transportation or for the lifestyle that comes with it, but women do it for their own selves, for the aftermath, for the peace of mind and the “me time” they enjoy while riding their motorcycles.

And in a country like ours, the challenge is exciting and even more challenging for us ladies. So, when you decide to turn that engine on, you know the show is about to begin.