At the age of 4, Radwa El-Ghamry dreamt of touching the clouds. Little did she know that a mere 10 years later she would start a remarkable journey of firsts for female skydivers in the Arab world. At 14, she completed her first skydive jump and continued with her training to make 6 more jumps in a technique called static line skydiving. However, by the time she started college she was pressured by her parents to stop in fear for her safety.

After she moved to Dubai with her husband, El-Ghamry reached out to Skydive Dubai to resume her childhood passion. Unfortunately, her certifications in Egypt would not qualify her to jump in Dubai, and she had to start training again using a different technique. With her husband’s support, she completed 2000 jumps from as high as 16000 feet. El-Ghamry became the first Arab female tandem master instructor, a type of skydiving where a student skydiver is connected to a harness attached to a tandem instructor. She is also the first Egyptian Instructor of accelerated freefall (AFF), a method of skydiving where skydivers experience solo freefall in the fastest way.

El-Ghamry led the UAE women’s skydiving team to participate in 14 global competitions in 4-way jumps, which involves 4 skydivers jumping and making formations before landing with their parachutes.

While she conquered the world of skydiving, her journey encountered multiple challenges, both on the professional and personal fronts. Two years ago, she lost her husband to cancer and has since become a single parent. In June 2016, the women’s skydiving team lost their sponsor and El-Ghamry had to find a full-time job in the IT field, to support her two children. Now she instructs skydiving on weekends only. She dreams to find sponsors to assemble an Arab female skydiving team. 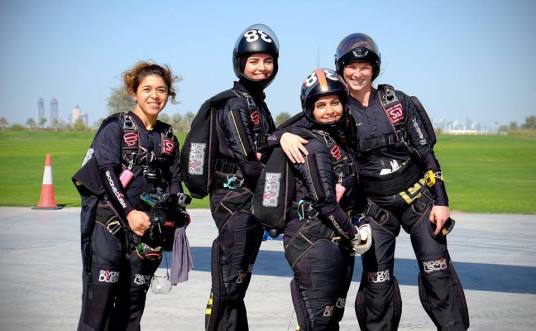 WOE: Tell us the story behind your first jump at the age of 14.
RG: I learned from a family friend that the military provided lessons to civilians. I was fascinated by skydiving and by him and was determined to try it myself. Armed with the knowledge that a skydiving certification would give me extra academic credits in my high school degree ‘Thanaweya Amma’, I convinced my parents to let me enroll in skydiving lessons. I told them I didn’t need to actually jump. However, I did in fact jump at the end of my course. My first jump was in Ismailia, the place where all my jumps in Egypt took place. I was one of two females in the group, all the others were men and military people. In this type of jumps, you are connected to the plane with a wire which automatically opens the parachute when you reach the right altitude without any intervention from the skydiver.

WOE: What was the experience like?
RG: It was a truly special experience. At 14, I think I was not mature enough to appreciate it, but I was incredibly excited because I was achieving a crazy dream that no one believed in.

WOE: When did you realize that you enjoyed it enough to do it for the rest of your life?
RG: Although I loved skydiving in Egypt, logistically it was difficult to skydive often. The trip to Ismailia and back made it hard to do more than a few jumps a year. I knew I wanted to do this professionally all along, but did not know how. However, years later in Dubai while supporting my cousin in running an informational program about skydiving for school children, I made good connections with Skydive Dubai and started pushing for having a women’s skydiving team just like the men’s. After convincing them and once I found sponsors for our UAE team, I quit my job and became a full-time skydiver. With the help of a Russian instructor who was a former world champion, we formed the women’s 4-way UAE skydiving team, which consisted of 2 Egyptians and 2 Emiratis.

WOE: What was the scariest moment during your training?
RG: Perhaps the scariest moment was when my parachute wires got tangled and I had to cut them loose and use the emergency parachute. However, you are trained for these situations, and if you follow instructions correctly, skydiving is safer than driving a car. It did take me about 20 jumps to feel completely comfortable and confident as a skydiver. It’s important not to become over confident, though, and to follow instructions as if it [each time] is the first time you jump.

WOE: Have you ever had any situation where you feared for your life while jumping?
RG: Not really. However, one of the scariest situations was when I jumped with my best friend, who decided she wanted me to be her skydiving instructor. I had just received my certification, and it was my first day as an instructor. So while she was very confident and happy, I was rather nervous. The jump went perfectly, and once we were under the canopy she started talking about her day like we usually do. I had to stop her so she can focus on the experience, which ended up to be a great one.

WOE: Is there anything you wouldn’t do as a skydiver?
RG: I would not do BASE jumping, which is when you jump from a fixed structure. The altitude is much lower than with skydiving and you only have one parachute, making it very dangerous. People need to differentiate between BASE jumping, an extreme sport, and skydiving, which is a safe sport.

WOE: Many describe skydiving as a life changing experience. Do you agree with this statement? Why?
RG: Absolutely! The skydiving experience has a profound impact on your personality. By conquering your fears as you jump out of a plane you challenge yourself and become aware of your strength. It gives you confidence and makes everything else seem manageable.

WOE: What has been your most memorable jump to date? Why?
RG: After my husband passed away, my father moved to Dubai to be with me. He accompanied me to work every day and counted all my jumps. One day, he decided it was time for him to skydive as well. Since he is an elderly man with asthma, my family and I objected. But at his insistence, we proceeded with the jump, and I experienced this amazing feeling with him. I was nervous, but it is definitely my most memorable jump to date and it is a memory I deeply cherish.

WOE: Can anyone skydive?
RG: Anyone above the age of 18 can skydive if he or she is willing to challenge themselves.

WOE: What would you suggest to anyone wanting to learn to skydive?
RG: My advice for people is to just start with the first jump. Try a tandem jump where you are strapped in with the instructor and you will know if this is something you want to do or not.

WOE: Have you taken your kids skydiving yet?
RG: I have not, since they are still below the age of 18. I did, however, perform 40 jumps while pregnant with my daughter. My children fly in an air tunnel for now. My daughter is somewhat scared, but her older brother loves it. I would have loved to skydive with my family one day when my children are trained, but unfortunately now we will be 1 member short of a 4-way jump. 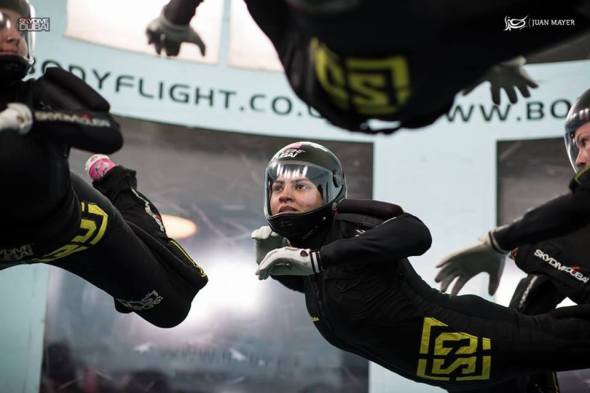 WOE: What do you do when you are not skydiving?
RG: Working full time, skydiving on weekends and being a single mom don’t leave room for much else, to be honest. However, for the past 4 months, I have been working with DAT Academy, a cross fit academy that promotes a healthy lifestyle and sports for women. This academy was founded by cancer fighter Khalifa Dafoos. This cause lies close to my heart, and I am very passionate about promoting sports and a healthy living as a way to protect from such diseases. I also performed a jump to support and promote DAT Academy.

WOE:  And finally, what are your future dreams for skydiving and otherwise?
RG: My dream is to form a female professional 4-way skydiving team that represents the Arab world. I also hope to one day have a motivational program on radio or TV, to share my experiences and challenges with people and support younger women to understand how sports can change their lives. I would also use this platform to highlight other inspirational women and take them skydiving at the end of each show.