A Breast Cancer Survivor Shares Her Experience and Message of Hope. 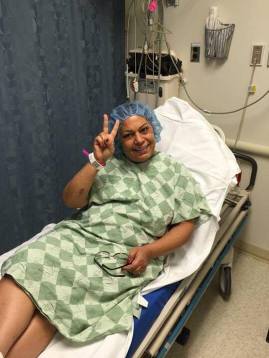 Breast cancer may be among every woman’s worst nightmare. It ends lives. It changes lives. It brings ongoing plans to an end and redefines priorities. The emotional trauma breast cancer patients endure shakes their femininity to its core. The surgery scars serve as a constant reminder that their bodies were invaded and the symbol of their sexuality and motherhood was violated. It is difficult for women diagnosed with breast cancer to think of the best case scenario, since no matter how courageous they are the idea of mortality looms over their heads. When Maha Hafez Witherington was diagnosed with breast cancer, all she could think of was that she was given a death sentence. “I thought I had my whole life ahead of me, but in a matter of days, everything changed.” Maha said. 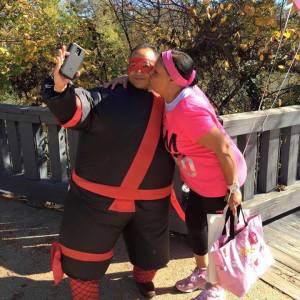 While many lives are defeated daily by the fatal disease, life still offers a thousand reasons why the battle is worth fighting. Every day, inspirational women around the world are showing strength, resilience, courage and determination throughout their journey of overcoming breast cancer. Their stories are the essence of the Breast Cancer annual campaigns celebrated worldwide during the month of October to increase awareness, raise funds for research, and offer information and support to those affected by breast cancer. 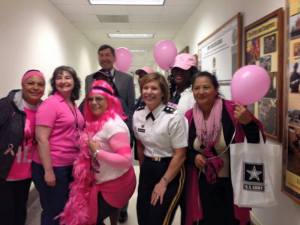 Maha’s involvement with the cause began the first day she was diagnosed with breast cancer. For the proud cancer survivor, participation during October’s Breast Cancer awareness programs comes on top of her priorities. “I purchase breast cancer items, pins, bracelets, scarves, necklaces. Wearing them identifies me as a survivor and has allowed me to meet many other survivors wearing similar items.”  Maha explains.

Vendors donate twenty percent of funds to breast cancer research and charitable entities that assist women in need during their treatments. “I also participated in the Susan G. Komen Pasta Night fundraising dinner and a 5 Kilometer walk with over 35,000 other people from the State of Arkansas.  The turnout was really great and included patients, survivors, mothers, brothers, sisters, aunts – you name it. The proceeds again went to breast cancer research. I also attended a few workshops and a couple of events at participating stores.” 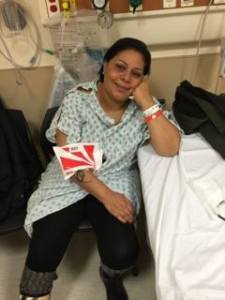 Maha was 57-years-old when she was diagnosed with stage 2 breast cancer. “I felt an itch on the upper part of my right breast and as I scratched it, I felt a lump the size of a small lemon moving in my hand. I immediately made an appointment and went for a screening.” A week later, the doctor confirmed her fears. “It was an emotional roller coaster that ranged from panic, to joy that I would beat breast cancer, then back to fear and despair.” Maha recalled.

Eager to learn more about the treatment and procedures to prepare herself for the fight ahead, Maha joined various support groups at the hospital where training and assistance to patients and survivors were provided. “I was trained enough to stand in front of a crowd and talk, support and motivate. After my last treatment, I participated in a really wonderful survivor’s workshop. Each discussed how they dealt with the diagnosis and how it affected them and their loved ones.” Maha said. 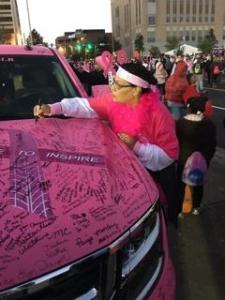 Over the course of the next two years, Maha had a lumpectomy, went through chemotherapy hormone therapy and radiation. With the care, love and support of her husband, her two daughters, son and mother who came from Egypt to care for her, Maha received her treatments at the Georgetown University Hospital in Washington, D.C, where she lived and worked. After the doctors removed the tumor and before starting chemotherapy, which included 16 vicious infusions over the course of 4 months, she went to the beauty salon and shaved her head. 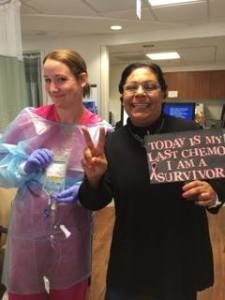 Maha acknowledges that life for breast cancer patients in Egypt is even more strenuous. “Those who are diagnosed with breast cancer feel stigmatized. Since many believe they are socially unaccepted, they are reluctant to face the disease or even mention the word cancer. Instead of seeking support, many women hide away and some even refuse treatment.” Maha explains the reason for refusing treatment is mainly because “many women go into denial. They think, Why me? This isn’t fair. What did I do to deserve this?” 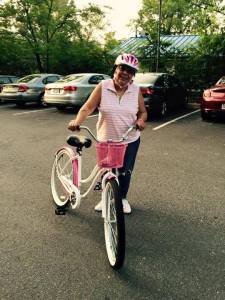 Due to the relentless efforts of many survivors and breast cancer organizations to raise awareness in Egypt throughout the past decade, more women are finding comfort in opening up and sharing their experiences. For patients to cope and accept support from others who have gone through the same path, Maha believes that additional effort towards breaking the taboo subject of breast cancer in the Egyptian society needs to be done.

Maha advises women to participate in various activities for the cause and attend support groups to learn more about the disease and its treatment. She encourages women to share their emotional journeys with the disease, as their testimonials are the fuel that propels to follow path. “Cancer did not succeed and it certainly did not win. It took part of my life and a piece of my body, but it did not take me! With cancer I learned how to be fierce, much stronger, and a wild fighter. I kicked cancer’s ass and I’m ready to kick it all over again if it decides to recur. I don’t have to look at my scars and feel uncomfortable about my body anymore. I have learned that it doesn’t matter who you are or what you’ve been through, with faith you are beautiful in spite of your circumstances.”