The number of Egyptian women marrying foreign men of different ethnic and cultural backgrounds is increasing, defying the social customs and traditions. In the cyber age, love is no longer restrained by geographical boundaries. Dating is made easier through social networks and dating sites. And with more women travelling abroad to study or to work, it became easier to meet the men of their dreams. Is it only love that attracts women to intercultural relationships, or is it also because women feel that foreign men treat them better than Middle Eastern men?

Hoda Haggag met her husband 14 years ago at the Bibliotheca Alexandrina, where she worked. Her husband was born and raised in Egypt, to a Chinese father and Greek mother, and carries the Egyptian and Greek nationalities. They married in 2004, one year after they met and they live in Alexandria. Hoda has a twenty-year-old step son and a twelve-year old son. She runs the family antique business with her husband.

What attracted you to him?
First was his smile, initiative, firm hand shake, confidence and openness. Then came the qualities that I thought I’d never find in a man in Egypt: artistic, philosophical, passionate, and, above all, a broad-minded, inclusive, non-dogmatic, multi-cultural spiritual and religious outlook.

How did you feel about intercultural marriage and relationships before you were in one?
It was a favorable idea but it hadn’t fully taken form at the time yet since I had very minimal interaction with foreigners. However, I had started realizing that finding a suitable Egyptian partner with a mentality and cultural background compatible with mine was almost impossible.

Do you feel any different about intercultural marriage and relationships now?
I am surer now than ever that it was the best thing for me.

How did your family and friends react when you informed them of your intercultural relationship and subsequent marriage?
It didn’t really raise any eyebrows since it was not a typical intercultural marriage. My husband was born, raised and lived in Egypt all his life and speaks like an Egyptian, so he blends in quite well. I was also raised in a rather liberal, westernized manner. The most controversial issue which is religion was already resolved because he had converted to Islam a long time before we met.

What about your husband’s family?
They had no problem in that respect either.

Did you ever or do you now face skeptics and criticism from friends and/or family about your intercultural marriage?
No. The only skepticism and criticism I faced was due to a large age difference, having a son from an earlier marriage, and this being his third marriage.

How do you compare relationships with Egyptian men vs. a non-Egyptians?
I noticed that my husband in general is more mature, independent, responsible and reliable, than most Egyptian men. He grew up to be his own boss and sole decision maker of his life. Also, there’s no such thing in his upbringing that allows him to do something a woman is not allowed to do, or to impose something on a woman because he is not expected to do. He never acts like he’s above house work. He cooks and taught me how to cook. If he’s hungry, he gets up and make himself something to eat.

What do you do for fun?
Normal stuff, travel, hang out with friends, unwind in front of the t.v. after a long day, etc. We also both share a passion for music, myself by listening, he by playing the piano and listening. So, we enjoy different music related activities.

Were there any cultural challenges you faced when you first got married?
Not really. The local influence of his upbringing and the western influence of mine made us meet mid-way quite conveniently.

Do you have any suggestions for Egyptian women entering or considering an intercultural relationship?
She has to weigh all aspects of the ensuing life style very well on the long term, accept her partner as is and remember that he accepted her as is also. She can’t simply decide at a later stage in life that she needs to radically change her life style and revert back to her “roots” and expect to tag him along. They also have to discuss how their children will be raised in general and regarding religion in particular.

How do you think life would have been different if you didn’t meet your husband?
There’s a possibility I wouldn’t have been married. I would have definitely pursued my career further, at the Bibliotheca Alexandrina, which would have possibly involved some travelling. I would have been active on the dating scene especially with non-Egyptian men, I suppose.

Theresa Khalil is a writer, documentary filmmaker, entrepreneur and content creator. She spent most of her life in Egypt. She moved to Sharm ElSheikh in 2007, then to Europe in 2012. In Egypt, she always felt like an outsider, thinking differently and asking a lot of questions. It has been always difficult for her to fit in a society or follow the main stream. Theresa is married to a Croatian she met on a dating site and lives in Zagreb, Croatia. They knew each other for 6 months before they got married in 2014. She is currently writing a new book “Love Surfing” about her journey with dating sites till she met her husband.

What attracted you to him?
I was sick at that time and he was very supportive and trying to help me by all means although he was in another country. So, I thought if he is there for me when I am sick and far then there is nothing to fear. Plus of course he was a nonsmoker, feminist, thinking outside the box and handsome.

How did you feel about intercultural marriage and relationships before you were in one?
I was always looking for one, because I had different mentality from the society I grew up in and I thought I will be a better fit with someone from a developed country.

Do you feel any different about intercultural marriage and relationships now?
As I said, I thought this was the best for me and it turned to be true.

How did your family and friends react when you informed them of your intercultural relationship and subsequent marriage?
My family is not a traditional family so there was no problem. Also, my brother is married to an American. As for my friends, I think they were happy for me.

What about your husband’s family?
They welcomed me from the first moment and I really feel like I have new parents.

Did you ever or do you now face skeptics and criticism from friends and/or family about your intercultural marriage?
Not any I am aware of.

What do you do for fun?
Hiking, photography, going to the cinema, trying new restaurants.

Were there any cultural challenges you faced when you first got married?
We had and still have language misunderstandings, as English is not our native language, so sometimes we misunderstood things and this caused problems, but over time we expected it to happen and now it is funny. I am also trying to learn Croatian but till now I don’t use it much. 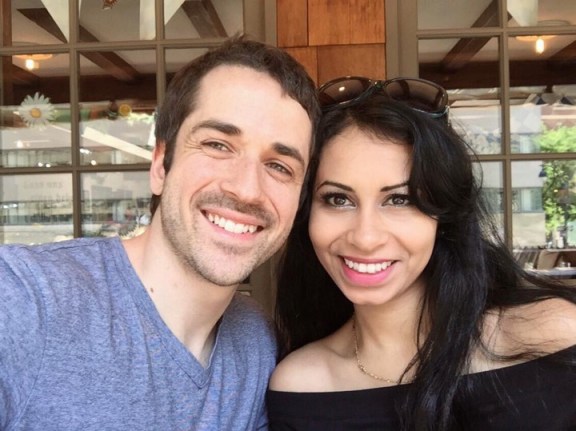 Aya received her BA from Alexandria University, and currently she is studying engineering at the University of South Florida where she lives with her husband and 3-years-old daughter. Aya’s husband is American. They met online. He traveled to Egypt to meet her and they got married there. They knew each other for seven months before he proposed to her. In October, they will celebrate their 4th anniversary. Aya also works part time.

What attracted you to him?
We had the same mentalities and we shared the same interests, not to mention that he was good looking.

How did you feel about intercultural marriage and relationships before you were in one?
I like European and western guys because they are open minded.  They respect women and they don’t have any weird culture that considers women below men. I have dated Europeans before, so marrying a westerner is perfect for me because I don’t like the mentalities of Egyptian or Arab men and how they don’t respect women!

How did your family and friends react when you informed them of your intercultural relationship and subsequent marriage?
Some of my family didn’t like it, but then they liked him when they met him. But I don’t really care what friends or family think, because it’s my life not theirs, so they don’t get to say their opinions!

What about your husband’s family?
They don’t have any weird thoughts about different ethnicities!

Did you ever or do you now face skeptics and criticism from friends and/or family about your intercultural marriage?
I didn’t face any criticism. Some girls were just jealous and expressed that to me in words. And a lot of guys were just angry about it because their culture teaches them that they own the women in their society!

What do you do for fun?
Play tennis, workout, shop, go to the beach, play with our daughter, go out on dates!

Do you have any suggestions for Egyptian women entering or considering an intercultural relationship?
I think Egyptian women should stand for their rights and get treated equally and respected! If an Egyptian man can’t treat you with respect and equality then consider a person who can give you that, no matter what his ethnicity or nationality!