Egypt’s Easy Rider Travels the Country on a Motorbike 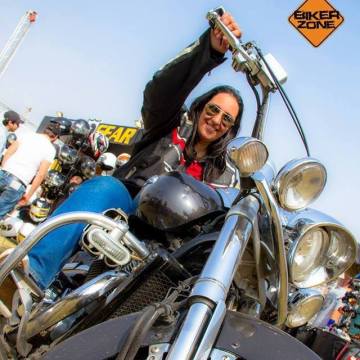 On October 29, 2016, Shereen Adel, a computer science graduate, travel writer and a passionate biker, became the first Egyptian woman to tour Egypt on a motorcycle.

Together with 4 other riders, including her husband, she completed a circular route of 2700 km in 9 days, from Cairo to Marsa Alam, Aswan, Luxor, the oasis of Kharga, Dakhla, Farafra, Bahareya and back to Cairo.

Shereen has published 3 travel books; “Al Awela Paris,” “Al Fayrouzeya” and “Hostel,” which hit the top bestseller charts in 2016. She is also a member of Egyptian Nomads, a travelers’ club, who engage in cultural activities related to travel.

She plans to ride solo around Egypt.

WOE:How did the idea of touring Egypt on a bike materialize?
SA: I didn’t really plan for it, but these things happen gradually, and one thing leads to another. My husband and I are travel enthusiasts. On our honeymoon, we travelled all around Egypt by car, and every year that followed. It was only natural after we started riding motorcycles to want to do more than just the weekly Friday morning rides to nearby places in or around Cairo.

We started off with single destination rides to Hurghada, Dahab, Bahareya Oasis, Siwa, and other places, then went on to more difficult multi-destinations routes.

How did your interest in bikes complement or affect your life and your career?
SA: For a few years after I started my job, I rode a scooter to work, from Downtown Cairo to Nasr City. It was a life changing experience. Manoeuvring through Cairo traffic was thrilling, like a daily morning dose of adrenaline to boost my energy for the rest of the day. I no longer suffered looking for parking spaces and spent less on gas. Simply, I got everywhere on time with ease and with the most economic means possible.

WOE: As a female traveller in a male dominant society, how do people react when they see you on a motorcycle, especially in the remote areas you travel to?
SA: When I am riding a motorcycle it’s a bit hard for people to notice that I am a woman because I’m all geared up, wearing a safety jacket, my hair tucked under a helmet, you know. But I definitely got more than my share of surprised facial expressions and gasps on the scooting days Cairo, where my safety measures were loosened up a bit and it was obvious I am a girl.

But on long rides, the funniest reactions I get are definitely at security checkpoints. A security guy asks for my licence with a long face, and when I raise my helmet visor and start talking, his eyes widen in shock. At that moment, license is no longer an issue. 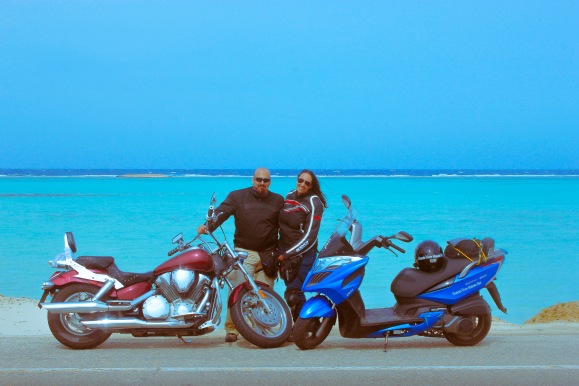 WOE:Do you have sponsors for your travels and has your trip been covered in the media?
SA: I have no sponsors yet. I might seek some as I plan to ride solo around Egypt. And yes, there has been some publicity. I have been featured in a couple of radio and TV shows. My most recent interview was with Sherif Madkiur on Nogoom FM.

WOE: What was your parents and siblings’ reaction to your hobby?
SA: I have no siblings. My parents went crazy of course when I got my first scooter. I kept it a secret for a while and one day I just walked in holding my helmet. My mother stopped talking to my husband for two weeks as she held him accountable for “my irresponsibility.” They didn’t really give him a hard time, though, especially that my dad who was an ex-rider, bought himself a bike few months later.

WOE: Do you usually take your trips alone or with friends?
SA: I go on long rides with my husband and friends.  Group rides usually slow you down because of too many logistics involved, but on the other hand they are memorable experiences for years to come.  Now there are the lone wolves of course, those who prefer to fly solo, and I’ve never tried that to be honest. So, like I said, my next plan is to try a solo ride, just for the thrill of it!

WOE: Do you wish to ride in other countries as well and get more international publicity than just in Egypt?
SA: Yes and no! Yes, I definitely want to tour other countries and I have been thinking about that for years now, just the timing is not right yet. And no, I don’t think I can have publicity outside Egypt simply because there are many women out there who tour countries on their bikes.

I am definitely honoured to be the first Egyptian woman who toured Egypt on a motorcycle. I’d rather be an inspiration to Egyptian women, to empower them into believing in themselves and their capabilities, and to rise up to do more for themselves and for Egypt.

WOE: Have you considered giving seminars to encourage Egyptian women to follow their dreams, even if that might be viewed odd by social standards?
SA: As a travel writer, I have been giving seminars for years now on travel in general. I met a lot of girls who dream of touring the world, or even visit places inside Egypt with their friends, but their parents would not let them travel alone.

In one of my seminars a gentleman walked in with his twenty something year old daughter, listened till the end and then walked up to me and said, “My daughter has been begging me to let her travel alone and I’ve been seriously against that. But now I might give it a second thought.”

People are only afraid of the unknown. Our parents’ generation was born at a time where societies were more enclosed, so it is natural they are overwhelmed by the amount of possibilities our generation has. We just need to introduce our ideas to them a little bit at a time.

WOE: How do you think the government or NGOs could further promote bike riding for women?
SA: They need to promote riding for all genders in fact. Right now, we have many constraints on motorcycles and scooters in general. Prices of scooters have soared because of importing restrictions, when they should be the solution to the economic crises, with their small tank consumption as well as a solution to traffic congestion. Motorcycles are prohibited from entering Sinai, even though the biking community can help promote tourism there.

Another initiative that should be recognized and encouraged is the scooter riding schools for girls. “Girls Go Wheels” in Cairo and “Let’s Scoot” in Alexandria became the starting point for girls wishing to enter the world of scooters and motorcycles. Because of these schools, and the pioneer women who were first seen riding their motorbikes and scooters,  now we see more girls scooting their way all over town.

WOE: What are your hopes and aspirations for the future?
SA: On the personal level, I dream of the day we would be a full house of family riders, touring Egypt with my husband and daughter, Sofia, each on their own bike.

On the general level, I wish we would have not only an environment that encourages and facilitates riding of all sorts, be it sport, adventure or simple cruising; but also, to have training academies to train and present Egyptian riders, both males and females, in international motorcycle events like motoGP, Dakar Rally, isle of man TT and others.