Driven by her passion for new adventures, Shaimaa El Zayat, the 33-year-old cyclist and world traveler, loves to embark on life altering journeys that push the boundaries and challenge her being. The latest of these adventures was a cross-country solo cycling tour along the four rivers of South Korea. In six days she covered 633 km, through bike trails stretching across the country from Incheon in the northwest to port city of Busan in the southeast.

South Korea is not your typical destination for Egyptian travelers, especially if it is in the context of a cycling tour, but for Shaimaa it was the perfect location, for her to elevate the level of her adventures to a whole new level. Establishing itself as a world class sports destination for cyclists, South Korea converted 1700 km of old rail tracks, across the country, to cycling trails. Shaimaa, a cycling enthusiast, couldn’t resist the temptation. “There is nothing that strengthens your backbone and sharpens your character like a good challenge.” Shaimaa said. 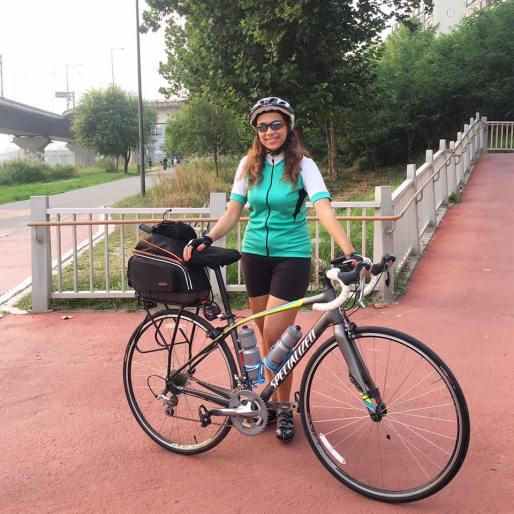 Shaimaa, an architect who was born and raised in Cairo, Egypt, learned cycling at the age of 5. She maintained this hobby over the years and practiced it whenever she had a chance to escape the chaotic Cairo traffic. The turning point in her life happened after she moved to the Netherlands, in 2011, to study for her post graduate diploma in Environment and Energy Management at Erasmus University.  “As soon as I got there I bought a used bike, which I upgraded 3 weeks later, for long rides between cities on the weekends.” She used her bike to cycle extensively throughout the Netherlands and Italy.

What Shaimaa likes most about traveling is the freedom it affords you to wander without the constraints of a schedule and while meeting inspiring people from all walks of life. It is that freedom that taught her to become more independent and responsible. So far her wanderlust has taken her to forty-one countries, always including an adventure in her trips. Her most memorable moments were hiking the Annapurna range in the Himalaya in Nepal, hiking and kayaking in Sierra Nevada de Santa Marta in Colombia and in Tsitsikamma National Park in South Africa.

“Exploring cities on bikes is a completely different experience. Away from technology, the chaotic lives we tend to lead and the daily stresses we encounter at work, life simply slows down when you are on a bike. And when biking through breathtaking landscape, you become completely immersed in the beauty of nature, appreciate your own company and reflect on the things that truly matters to you.”

Shaimaa planned the route for her South Korean trip on Google maps, and pinned all the accommodation and restaurants along the way.  Shaimaa’s mother, a huge supporter of her daughter’s adventures, was as excited about the cycling trip as her daughter. She helped her plan the trip and called her daily to cheer her on and ensure she covered the planned distance. “The challenge for this trip is in the planning and the execution, rather than the distance covered. As an active member of the GBI- Global Biking Initiative, the distance was not that challenging.” Shaimaa said. 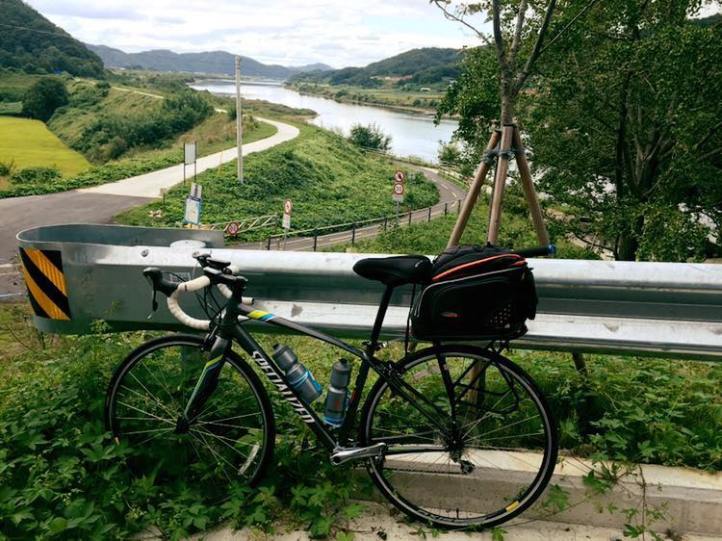 Shaimaa cycles with the GBI group on weekends, in the early morning hours on Sokhna road. “Cycling culture and sports awareness, in general, is increasing in Egypt dramatically. It started with a few people hitting the road on their bikes; later different groups were formed, which attracted even more cyclists. In addition, a lot of environmental campaigns were spreading awareness about the benefits of cycling. Also bikers who lead a healthy and fit lifestyle inspire others to follow suit.” Shaimaa explained how the cycling culture is evolving in Egypt.

When not working, cycling or travelling, Shaimaa reads and does yoga. She exercises regularly at Gold’s Gym and runs with Cairo Runners, whenever her time permits. In 2015, she participated in her first super-sprint triathlon with TriFactory, an initiative that promotes the Triathlon culture in Egypt.

The athletic lifestyle Shaimaa leads qualified her for adventure without the need for special training. “As an athlete, I stay fit and eat healthy all the time. I train on my bike on weekends and attend spin classes in the gym on a regular basis. I set my own goals, training plans and schedules.” Shaimaa explained.

To keep the cyclists motivated to finish the entire distance, the South Koreans erected red booths, similar to the phone booths in the UK, every 20 to 30 km, along the 4 Rivers Bike Path.  At the starting point, cyclists purchase a cycling passport, and they stamp it at every booth along the way. After presenting the passport with the entire stamps at the finishing point, they receive a certificate and a medal for the completion of the cross-country tour. 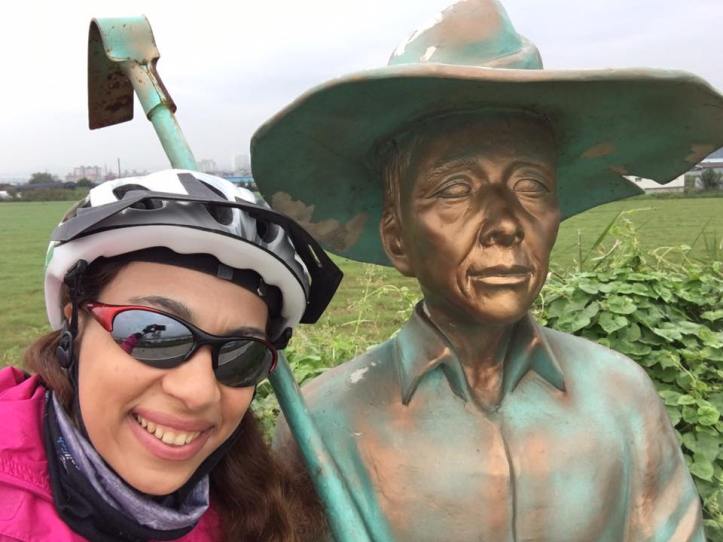 Combining her two passions, Shaimaa dreams of touring the seven continents on two wheels. South America is next on her list. “I believe that the world is created to be explored. Be your own explorer. Seek new adventures that fulfill your soul, and whenever you feel any negative energy, push it out with a new challenge. Always challenge yourself and never underestimate your strength!”